From the Library of Congress collection comes this image of a possibly unhappy ending. 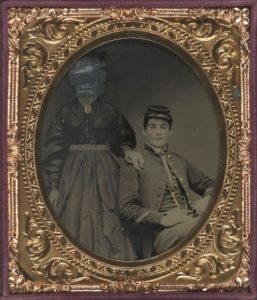 Here is a fun find from over a hundred years ago, thank you Hilaire Belloc:

I shoot the Hippopotamus

With bullets made of platinum,

Because if I use leaden ones

His hide is sure to flatten ’em.

The Confederate Congress sometimes passed “votes of thanks,” such as the one to Cleburne’s Division for the defense of Ringgold Gap (many Texans fought there as well). Another striking event was this proof of the strength of realtors’ “location, location, location” mantra: Sabine Pass. The emphasis is mine.

No. 14. — Joint resolutions of thanks to Captain Odlum, Lieutenant Dowling, and the men under their command.

Thanks of Congress to Capt. Odlum, Lieut. Dowling and the Davis Guards under their command, for the defence of Sabine Pass, Texas.

Resolved, That the thanks of Congress are eminently due, and are hereby cordially given, to Captain Odlum, Lieutenant Richard Dowling, and the forty-one men composing the Davis Guards, under their command, for their daring, gallant and successful defence of Sabine Pass, Texas, against the attack made by the enemy, on the eighth of September last, with a fleet of five gun-boats and twenty-two steam transports, carrying a land force of fifteen thousand men.

Resolved, That this defence, resulting, under the Providence of God, in the defeat of the enemy, the capture of two gun-boats, with more than three hundred prisoners, including the commander of the fleet; the crippling of a third gun-boat, the dispersion of the transports, and preventing the invasion of Texas, constitutes, in the opinion of Congress, one of the most brilliant and heroic achievements in the history of this war, and entitles the Davis Guards to the gratitude and admiration of their country.

President requested to communicate these resolutions.

“Come and take it” indeed….

I recently learned a bit about Lucretius’ De rerum natura, a nearly 2,100 year-old document that provides summaries of science, philosophy, and other human behaviors. A snip from one web page caught my eye:

Hutchinson points out that Lucretius often juxtaposes the depiction of pleasure with an immediate cold shower of a depiction of regret, frustration, and absurdity.

That is a broadly useful statement. Cheers.